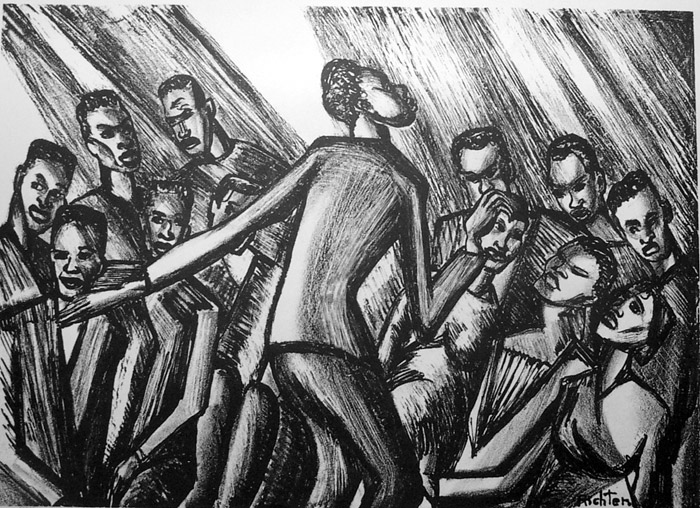 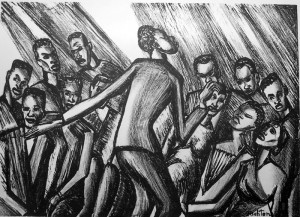 Music is an important part of my life.  Whether jamming to an upbeat rock song at the gym or playing a sad song incessantly after a heartbreak, I, like many other people, can imagine creating a soundtrack to my life filled with the music of my generation.  Music gives me the words I can’t find, and it gives me a rhythm to dance or slowly rock to.

I like many different kinds of music, and I see God in a lot of it.  With a thin line between the sacred and the secular, I find as much divinity in Gavin DeGraw’s “I Don’t Want to Be” and Martina McBride’s “In My Daughter’s Eyes,” as I do in Kirk Franklin’s “Hold Me Now.”  In fact, I play Michael W. Smith’s version of “Breathe” before each class I teach.  It centers me and reminds me that the task of training ministers, justice workers and religious scholars is more about God than our brains.  Yes, all this from a six minute song.

In fact, it’s probably the music that constitutes my strong attachment to black churches. I was raised in black Baptist and Methodist churches populated by people raised in the South.  With my mind’s eye, I can still see the deacons in their plain black suits and ties sitting single file across the front row with curved spines rocking back and forth.  To their right are the deaconesses in their white dresses, white hats, white shoes.  Sitting proudly with straight backs and gloved hands.  Intoning together in low voices, everyone sounds like altos and tenors.

Peering around the heads before me, I kneeled in the pews of Shiloh Baptist Church in Washington, DC (my parents’ home church) trying to get a better glimpse of the singing in the front.  My mother didn’t pull me to my seat; she was swaying herself.

While I appreciate a good hymn, gospel music and contemporary Christian music, my earliest memories of church include the harmonious a cappella moaning birthed in the sharecropping cotton and tobacco fields of Georgia and the Carolinas.

Spirituals are such a part of my life that I’m still realizing which songs are spirituals.  “Every time I feel the spirit” and “Ezekiel saw the wheel” are songs I learned in Vacation Bible School.  I assumed all little Christian kids did.  In my participation in contemporary worship and predominantly white churches, I realize how particularized my religious experiences are.

The further I’m away from southern black churches and the more I understand depressions, the more I need spirituals.  Created by enslaved Africans in the United States, spirituals both express suffering and dependence on faith.  Indigenous to the African American slave experience in the U.S., spirituals are the Psalter of my people – expressing rage, despondency, hope and joy to God.  Like the Psalms of the ancient Hebrew community, the slaves took their emotions to God, put them to music and sang them in the secret hush arbors of their religious gatherings, while working and marching, and quietly to children at night.  Many scholars have argued that spirituals even served an insurrectionary role by encoding the paths to freedom in ways that slave masters could not understand.  And, as James Cone argues in The Spirituals and The Blues, the spirituals are theological because “they tell us about the divine Spirit that moves the people toward unity and self-determination.”  The spirituals moved slaves from suffering through God to release.  Perhaps only music can do this.

The spirituals give me a way to be sad without being alone.  Because they are sung in community, they say, It’s okay to suffer.  We know how you feel.  We are suffering too.  We all are. They aren’t afraid to linger in the painful places.  They have no need to rush to praise.  They can be slow . . . drawing out one syllable over tens of seconds . . . taking their time . . . waiting.  I don’t dare say that enslaved Africans were living with what we now call clinical depressions.  I don’t have the expertise or information to assert that.  But they knew how to takes moans and makes them hums and turn them into words.  They knew how to give voice to pain, and how to do it together.

Thus I’m convinced that when Jesus cried out “My God, My God, why have you forsaken me?” from the cross (Matthew 27:45-46), he wasn’t making a profound theological statement about the hidden God (see Thomas Aquinas for more on that).  Jesus was quoting Psalm 22, the spirituals of his people.  He was in pain and he began to sing.  In my sanctified imagination, I see the people at the foot of the cross joining him like we do today in my faith community:  slowly at first, one voice then another, humming then forming words.  It sounds like this.

When the women of Sweet Honey in the Rock sing this spiritual, they add a verse: “And I can hear my mother calling me, she’s calling me.”  They remind me, that if you stay in a spiritual long enough, you’ll hear God, you’ll feel hope.  In the depths of depression, I can think of no greater spiritual gift.