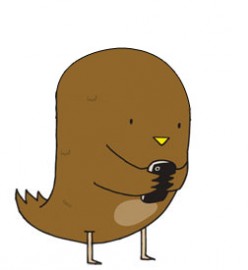 For me and many other African Americans, this summer has been dominated by the not guilty verdict in the trial of George Zimmerman for the shooting of 17-year-old African-American Trayvon Martin. Shortly after the verdict was rendered, media outlets announced that one of the jurors in the case had a secured a literary agent for a book deal to describe her experience on the trial’s jury. Many African Americans took to social media to condemn this project. Although it’s impossible to draw a causal relationship, the literary agent rescinded the deal. #BlackTwitter has been credited with the protest power that made it happen.

As I mentioned in an earlier blog post for The New Media Project, African Americans are disproportionately represented on Twitter. A recent study publicized on TechCrunch indicates that almost twice as many African Americans use Twitter as whites. Other data suggests that up to 40 percent of U.S. tweets are from African Americans (who represent just 13 percent of the U.S. population). While no official organization has been formed, the collective of African Americans on Twitter is quickly being viewed as social and political entity: #BlackTwitter.

To be sure, #BlackTwitter does more than express outrage at injustice. There are significant discussions about the television drama “Scandal” and Beyonce’s haircut. Some commentators argue that #BlackTwitter exists due to African-American interest in celebrity and entertainment culture. Giving a more nuanced perspective, Maya Francis argues that #BlackTwitter is “the digital unfolding of cultural blackness.”

The outrage over the Trayvon Martin case has also reignited the fire for social justice among those Americans who were either apathetic or prematurely reconciled about the effects of racism on the everyday lives of minorities. From my Facebook and Twitter feeds alone, the interest in attending the 50-year anniversary of the March on Washington for Jobs and Freedom this August has skyrocketed since the Trayvon Martin verdict. The initial march is most strongly associated with Rev. Dr. Martin Luther King Jr.’s iconic “I have a dream” speech. Martin Luther King III and Rev. Al Sharpton are spearheading the anniversary march. The leadership of black clergy (most notably the Southern Christian Leadership Conference) in the 2013 March on Washington causes me to wonder if and how #BlackTwitter may intersect with this call for justice.

Are individuals ready to go to Washington DC? I see some friends raising money online to take busloads of youth from their churches. Or will people stay home and watch the live feed online and Tweet about it? Or will #BlackTwitter focus on something else entirely on August 24?

I’m asking for more than a speculation on what Martin Luther King Jr. would Tweet. I’m wondering what would happen if #BlackTwitter harnessed its thirst for social justice and went to church. Might we demand greater gender and sexual justice within black churches? Might we reject theologies that focus on wealth and consumerism for a necessary connection between faith and justice? Might we seriously consider the critiques by Anthea Butler and J. Kameron Carter who decried the Christianity that cosigned the Zimmerman verdict? If #BlackTwitter can end a book deal nearly overnight, what kind of faith might it support?