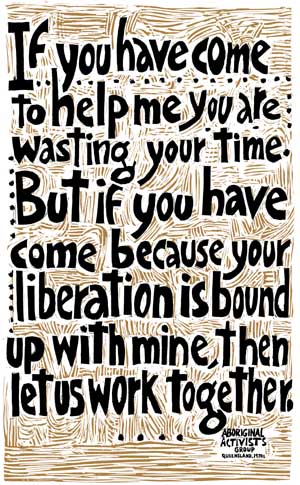 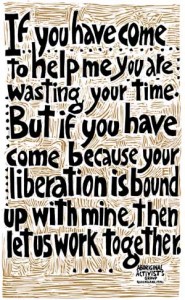 Sometimes, of course, we need to protect the government from religion. We need to ensure that arguments based on religious perspectives do not become the basis for our common laws. Rather our laws should be based on the shared values of equality, freedom, justice, liberty and that important but slippery phrase, “the pursuit of happiness.”

Over and over again, we see how difficult it is.

It is difficult it is to separate religion and politics.

The field of liberation theology asserts that religious faith leads to political activism in the interest of justice. Liberation theology is an umbrella term of various theological expressions that situate the experiences of society’s marginalized with the principles in religious texts that assert that we should treat each other the way we want to be treated, that God cares about the experiences of the outcast and downtrodden, and that our care for the oppressed in our midst reflects our love and devotion for God.

While this need not be a Christian principle, formal articulation of liberation theology was birthed in the late 1960s by Gustavo Gutierrez in Peru, and James H. Cone in the United States. Gutierrez was living and working among the poor in Latin America. Cone was considering the experiences of African Americans in the midst of the overturn of Jim Crowism, assassinations, riots, the civil rights movement and affirmation of self-love (black power). They both felt that the majority expressions of Christianity overlooked the Christianity that they read about in the gospels:

Luke 4:18: The Spirit of the Lord is upon me, because he hath anointed me to preach the gospel to the poor; he hath sent me to heal the brokenhearted, to preach deliverance to the captives, and recovering of sight to the blind, to set at liberty them that are bruised,

They concluded that God has a preferential option for the poor (Gutierrez), and that God is on the side of the oppressed (Cone).

In the last 40 years, these ideas have developed into some pretty sophisticated and important theological movements including Latin American, black, feminist, womanist, ecological, disability and gay theologies. This is not an exhaustive list.

I recently spoke on this topic on NPR’s “Air Talk” where Larry Mantle interviewed me.

I have a lot of academic and historical reasons for calling myself a liberation theologian, but there are also intensely personal reasons as well. My faith motivates me to fight for justice. My religion inspires me to speak out for those who are often silenced or ignored. My relationship with God tells me that a primary form of worship involves standing against stigma, torture and lack of equality. Sometimes that means I stand with governments who are doing the right thing. Often, it means standing against a powerful majority. That powerful majority can be found in groups of people or in institutions that wield power in oppressive ways.

I don’t do this because I belong to one political party or another. While that motivates many humanists towards social justice, it would not be adequate motivation for me. I do this because it’s what I believe in the depths of my spiritual understanding.

This is important because one common critique of liberation theology is that it tries to elevate one oppressed group over another, giving no role for those who are in the “oppressor” category. That would be a valid critique if it were true. Rather, liberation theologies acknowledge the power of our social locations and experiences in our understandings of God and the world. They may focus on the experience of one group, but not to the exclusion of other forms of suffering in the world. Oppression is multivalent – an individual may be oppressed in one sense, and privileged in another.

Liberation theologies call for us to acknowledge this. They call for us all to walk with those for whom equality, freedom and justice is more of an ideal than a reality.

I bring my understanding of liberation theology to my faithful struggle with depression.

People who live with depressive conditions experience a level of marginalization in today’s society. We’re called crazy. We’re hard pressed to get health insurance that actually meets our needs. We’re subject to sermons that suggest that greater faith would cure our depression (something I’ve never heard anyone say about diabetes or heart disease). We’re negatively judged in most workplaces. We’re told that a more positive outlook on life should make us happy inside out and out.

Okay. It’s not war. It’s not torture. There are far worse things to be experienced – especially in developing and war-torn countries. But it’s part of the daily experience of people who live with depressive conditions. And far too infrequently are we reminded that God loves us just as we are. And until we can feel that, someone else will stand with us and walk with us.

I’d like to think that it’s ignorance, not true disdain, which leads to the many misunderstandings about depressive conditions that exist both within and outside of religious circles. I’d like to think that many people rarely think about the lives of those who live with depression from the inside. Or that perhaps, that when they do, they do so out of pity, rather than with solidarity. That is, people with depressive conditions may be “one of the least of these.” But they are also the people we all love. After all, everyone is just one’s life tragedy (such as the death of one loved one) away from a bout of situational depression. We are not such different people. Standing with us is standing for yourself.

Liberation theology says that these are political acts, but they are also deeply religious ones.

Lately, I’ve been feeling rather isolated in this struggle. So I hum the African American spiritual to myself over and over:

While I’m on this tedious journey

Written by enslaved Africans in the United States and passed on orally to generations of both black Christians and freedom workers, this song has comforted and encouraged the broken-hearted and those harnessing their faith in search for justice. It reminds me that God is walking with me – even when my journey feels difficult and . . . tedious.

There’s no checklist for the right thing to do. I listed things I know about and could often use in my life. Traveling with others is not about turning into a major activist – if that is not what God has called you to do. Walking with me and others who live with depressive conditions is also to walk with yourself. Some say, it’s also a walk with God.

If you have come here to help me, you are wasting your time.

But if you have come because your liberation is bound up with mine, then let us work together.