funerals for the living 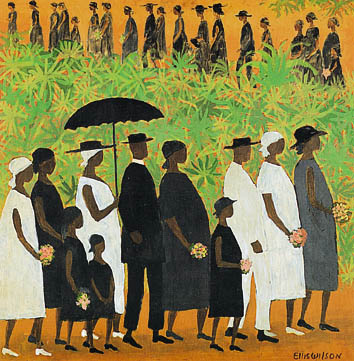 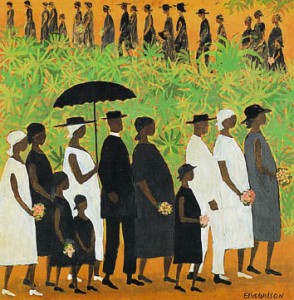 I recently sat at dinner with a group of seminarians talking about whether or not theological education prepares student-ministers for the everyday tasks of ministry.  At this particular time, we spoke about how classes in liturgy prepare seminarians to conduct some of the key rituals of our trade: weddings and funerals.  Weddings are fun, we all agreed.  Funerals are quite difficult.

There’s a part of planning funerals that isn’t so complicated.  Scriptures, sacred readings, hymns, obituary.  Sitting with the grieving friends and family.  The hard part is the eulogy.  There’s a lot of pressure to get the eulogy right.  We’re trained to talk with families, and focus on the life of the individual.  We’re also supposed to provide hope: hope in God, hope that we will all meet on the other side (if that’s what you believe); hope that life will go on.  After all, the funerals are for the living, not for the one who has died.

One person recalled a funeral of a gang member.  The eulogy was so inspiring that several members of the gang came down the aisle, dedicated their lives to God, pledged to make changes for the better.  Everyone at the table oohed and aahed.  That’s a good one.  Most of us could not remember the eulogies we’d heard.  Not even of close family members.  Maybe the eulogies weren’t that good.  Maybe grief erased our memories.

Many people who write about depression describe it like grief.  They say it’s like a deep sadness.  It’s like heartbreak, agony and despair all at once.  I’ve never felt that way.  I’ve always thought that grief was a walk in the park compared to depression.  Grief has an identifiable cause.  There are stages.  It eases over time.

Depression has always felt like death to me.  I’m not referring to suicide (that’s another post).  I’m talking about what is lost.  In every depressive episode, something is lost.  Something dies.  And it never returns.   Sometimes it’s the belief that you’re not that sick.  Sometimes it’s a dream.  Sometimes it’s a concrete plan or goal.  Sometimes it’s a harmful lie you’ve told yourself. Or someone told you.  Sometimes what dies needed to go.  Other times, it seems like you could have been perfectly fine without knowing this loss.

For many of us, this death is quiet and invisible.  It’s stealth.  We may not know what was lost until we feel alive again.  When we are able to whisper about what has happened . . . only our closest confidantes and therapists know what has died.

How would one structure this kind of funeral?  Would there be scriptures, hymns, sacred readings?  Who would attend?  What do you say in the eulogy?  Do you recall how wonderful the deceased was?  Do you talk about how she made wonderful contributions to the world?  Do you say our lives were the better for knowing her?  Do you say it’s okay to cry and scream over what and who has passed?  Do you say that even when someone has died, there is still life after death?  Do you say that even when something has died and it hurts like hell, something else is given the chance to live?  Do you remind the living that they still have their memories?  Do you tell the living – even the still-living person who for whom something has died – that we will all meet on the other side?  But we will be different?  We will all be transformed by what death does to us.

I tried this once.  When I realized that something very large inside of me died, I had a funeral.  I had sacred readings and songs and dance.  I wrote a eulogy.  I invited friends who didn’t completely understand what was going on.  I went to Good Friday services.  I did this for myself.  Because I was the person living who needed hope in the face of the death of someone I loved.

I didn’t know then that there was a template for this.  There is a way to write an obituary for someone who has died, but is still alive.   I think this is what the gospel writers tried to do.  I like their approach.  They talked about how Jesus was born, how they came to know him, what they liked best about him, what he did, who he touched.  They told their favorite stories about him.  And, unlike most clergy in eulogies, they didn’t shy away from talking about how he died.  They realized that death was an important part of talking about new life.